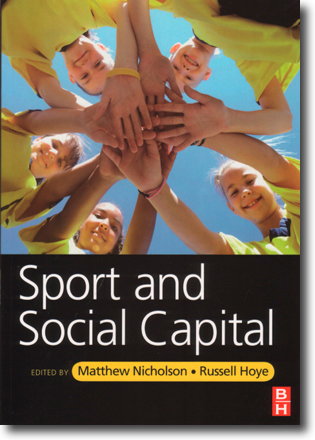 Sport and Social Capital, an anthology edited by Mathew Nicholson and Russell Hoye, presents fifteen chapters that explore some of the ways that sport influence and contributes to the creation, development, and maintenance, and in some cases even the reduction, of social capital. In their introduction, the editors writes that the contributions aspire to ‘critically examine the theoretical connections between sport and social capital and in doing so, highlights the central role sport plays in facilitating social integration and civic participation’ (p. 2). They also expect their book to function as the framework from which discussions on the social importance and benefits of sport could be advanced, but also from which public policy, specifically but not exclusively related to sport, could be reframed in order to facilitate the development of social capital.

Social capital has for some time now been a buzzword among politicians, policymakers and academics. Despite the obvious confusion around its definition, it is most commonly used in relation to civil or civic society, community or associations, as well as social cohesion (Putnam 1993; 2000; 2007; Coleman 1988; 1994; Portes 2000). Although some literature, predating 2000, with a social capital focus have included sport as an associational activity into their analysis (Putnam 1993; Helliwell 1996; Kennedya, Kawachib, Prothrow-Stitha, Lochnerb and Guptaa 1998; Hall 1999; Smith 1999), sport literature with a social capital focus tends to be of a more recent date (Jarvie 2003; Houlihan and White 2005 [2002]; Seippel 2006; 2008; Coalter 2007; 2008; Numerato 2008; Persson 2008). Whilst literature exploring social capital and sport is expanding rapidly, there has to date been no book length exploration on the topic. A recent exception is Sport, Leisure, Culture and Social Capital: Discourse and practice(Collins, Holmes and Slater 2007). Nicholson and Hoye’s edited text is therefore a welcome contribution to the field of sport and social capital.

Sport and Social Capital is divided into four sections: an introductory overview; concepts and contexts; clubs and community sport organizations; and sport and social capital in action. The introductory section, written by the editors, provides an overview of the usefulness of social capital as a conceptual lens for exploring the social significance or benefit of sport. This section takes as its starting point the commonly but unreflectively accepted idea that ‘sport [is] an institution capable of creating substantial social capital’ (p. 2). The authors provide the less familiar reader with a conceptual exposition covering a substantial part of the key social capital theorists and approaches, including the question of the existence of a ‘dark side’ of social capital.

The second section explores the shortcomings of the often over positive view regarding the benefits of sport – sport-in-development programs, organizations and policy – and its ability to create an inclusive social capital for the greater good of society (Crabbe 2008; Jarvie 2008; Coalter 2008; Hoye and Nicholson 2008). The third section, clubs and community sport organizations, discusses the potential for, existence of, and barriers to social capital in and through networks created in local voluntary sport clubs or associations (Doherty and Misener 2008; Auld 2008; Brown 2008; Cuskelly 2008).The fourth and last section explores social capital in action with examples primarily from around the Anglo-Saxon globe. Long (2008) examines how sport institutions, such as national sport governing bodies and organizationsmight deliver social capital with a focus on the UK, and Seippel (2008) looks at the role of social capital in delivering public grants that in turn are supposed to deliver sport facilities in Norway. Studying the Yorkshire based Black and Ethnic Minority Sports pressure groups, Hylton (2008) asks the question ‘is it possible to establish that social capital was actually stimulated by BEMSport and if so, how? Also from the shores of Great Britain, Bradbury and Kay (2008) engage in the debate around the social outcomes defined in policy discourses and which role, if any, sport can play in realizing these goals. They do this by investigating the capacity of youth sport volunteering to develop social capital. Lock, Taylor and Darcy (2008) examine the role soccer in Australia has played in relation to the creation of social capital and whether recent implemented governance changes has had an impact on the sport’s social capital. From a US context, Rosentraub and Ijla (2008) consider the different ways sport facilities might be used to advance, change, or interact with a culture and/or society in order to explore and define the role of sport facilities as elements of social capital.

Given the diversity of topics covered in Sport and Social Capital it is not an exaggeration to claim that there is something for almost everyone interested in the role social capital play in relation to sport. The contributions give plenty of inspiration for those of us that are engaged in social capital discussions on a regular basis, but also for those that may not yet have decided whether this pop-term and concept is to be taken seriously.

On a more critical note, for those that might ponder over social capital and gender inequalities, in terms of access to sport as well as social capital, Sport and Social Capital will be a disappointing read. Moreover, the book would have benefited from having had contributions from a wider geographical catchment area. One can only hope that Nicholson and Hoye will be given the opportunity to revise this substantial contribution to sport and social capital literature and thereby be given the opportunity to correct these shortcomings.

Overall, I have enjoyed reading Sport and Social Capital and felt sometimes challenged, while at other times I found support as well as inspiration for further reading and writing on the topic. The book is a rich source for new ideas, for new references as well as an insight into a body of somewhat older literature. Accordingly, it is a must read for graduates as well as researchers interested in the studies of sport sciences and leisure management.

Coalter, F. 2008 ‘Sport-in-development: Development for and through sport?’ In Sport and Social Capital, edited by Nicholson, M. and R. Hoye, Oxford: Elsevier.

Houlihan, B. and A. White 2005 [2002] The Politics of Sports Development – Development of Sport or Development Through Sport? London: Routledge.

Smith, E.S. 1999. ‘The Effects of Investments in the Social Capital of Youth on Political and Civic Behavior in Young Adulthood: A Longitudinal Analysis’. Political Psychology 20, 3: 552-580.

Within the social sciences, social capital is today widely used as a concept to describe connections within and between social networks. Most people will probably associate the term with Pierre Bourdieu, but one of the first writers to put a name to the value of networking was L.J. Hanifan, in an article about local support for rural schools. The definition of social capital was refined, and extended, during the twentieth century, and Bourdieu played an important part by relating it to other forms of capital. In the 1990’s, the concept gained wide recognition and popularity. Social networking was seen as valuable in and of itself, and many saw it as a the panacea for all social problems, with social capital its gain. Social capital reached new segments of the educated classes through Robert Putnam’s widely read Bowling Alone. The last five years or so have seen a glimmer of interest among scholars of sport for social capital as a viable concept in the analysis of the role of sport in society. One of the first books in this sub-field to hit the bookstores was Sport and Social Capital, an anthology edited by Matt Nicholson and Russell Hoye (Elsevier Butterworth-Heinemann) and featuring leading sport sociologists and sport policy scholars, such as Grant Jarvie, Fred Coalter, Ørnulf Seippel and Tess Kay. We asked Thomas Persson, who has been in involved in a project about sport and social capital on a European basis, to review Nicholson & Hoye’s book, and his knowledgeable review points out the strengths as well as the weaknesses of Sport and Social Capital.